In 2017, the Local Government Integrity Circles (LoGIC) Project commenced with a vision that is to develop a countrywide culture of integrity among Local Government Units across the Philippine Archipelago.

The initiative involved 300 LGUs with a mission to create a multi-sectoral local government integrity circles whose task is to facilitate the institutionalization of good governance practices like connecting various actors to LGU decision-making, strengthening confidence of investors, and enhancing effectiveness of programs implementation of government agencies, or – in short – to improve the general governance well-being of LGUs by 2020.

Three years down the road, the project co-funded by the European Union and by the German Federal Ministry for Economic Development Cooperation has started to paid-off.

Through the LoGIC Project’s Integrity Circles, 30 partner LGUs across five congressional districts in the Province of Iloilo gained the active participation of civil society, business and small enterprise actors, and other development stakeholders in decision-making processes.

The active participation of different stakeholders served as a key that cultivated a culture of integrity among LGUs thereby producing a multi-dimensional improvement to partner municipalities.

The project outcome displayed the following:

The Integrity Circles that were formed acted like change agents whose participation in local governance brought LGUs to new heights as far as transparent and accountable governance is concerned.

Larry F. Munion, who is the officer-in-charge of Miag-ao LGU’s Municipal Planning and Development Office shared that the project “allowed them to apply a ‘whole community approach’ which resulted to active partnerships on various public service endeavors between CSOs, business sector, and the LGU.”

He emphasized that the LoGIC Project’s application of the “Integrity Self-Assessment Tool (ISAT) proved beneficial for the 1st Class Municipality for CSOs-business-LGU partnerships leveled up investor’s confidence and it increased multi-stakeholder’s participation in programs implementation of the LGU.”

The Miag-ao LGU also shared that the project further enhanced existing good governance systems elevating participatory decision-making approaches like dialogues and consultations with stakeholders to a level of best practice. These practices were even mirrored down to the barangay wherein community-based CSOs are also operating.

or Munion, the project has also delivered immense improvement within the LGU bureaucracy in the form of efficient human resource management. The 1st Class Municipality earned a bronze from the Civil Service Commission’s Program to Institutionalize Meritocracy and Excellence in Human Resource Management (PRIME-HRM) and a Seal of Good Local Governance (SGLG) from the Dept. of Interior and Local Government (DILG).

Another dimension that revealed the effectiveness of Integrity Circles is displayed by Sta. Barbara LGU.

The local chief executive appointed a focal person who will ensure that the gains attained from the work of the Integrity Circle is sustained and to oversee implementation of follow through activities.

“Our chief executive intends to nurture the activities institutionalized from the project like the pulong-pulong or dialogue with suppliers and vendors for these processes yielded positive results and it strengthened relations between the LGU and its stakeholders,” stressed Blessie S. Luzarita, an officer designate who heads the Local Enterprise and Investment Promotion Office (LEIPO).

For instance, “the consultations that we conducted recently with the vendors were instrumental in the development of online market which linked sellers with consumers during weeks of quarantine. The activation of the digital platform resulted in the organizing of the Association of Online Market,” shared Luzarita.

The 2nd Class Municipality also highlighted the importance of transparency using media to connect people to the LGU. It established a radio station with a frequency covering the municipal boundary to provide its constituents with reliable source of information, accurate news, timely advisories, and to serve as a feedbacking channel between LGU officials and the people.

“While most LGUs usually appropriate 20 percent of its annual budget for Municipal Development Fund (MDF), Dingle’s chief executive worked out a 46 percent MDF with an end view of providing stronger financing for its development projects,” reported Palabrica.

It catalyzed more development projects in the 3rd Class Municipality, bringing roads to the farthest barangay so that farmers can bring their produce to consumers and key infrastructures were completed to improve education and service delivery to people.

It also institutionalized internal control systems to minimize wastage of LGU resources by centralizing office supplies, managing transport use, and by harnessing in-house catering of food. Usual as it may have appeared, these financial management measures improved allocation for other essential services needed by its people. It allowed Dingle LGU to construct secondary medical laboratory that can cater to indigents and the vulnerable sector in town. 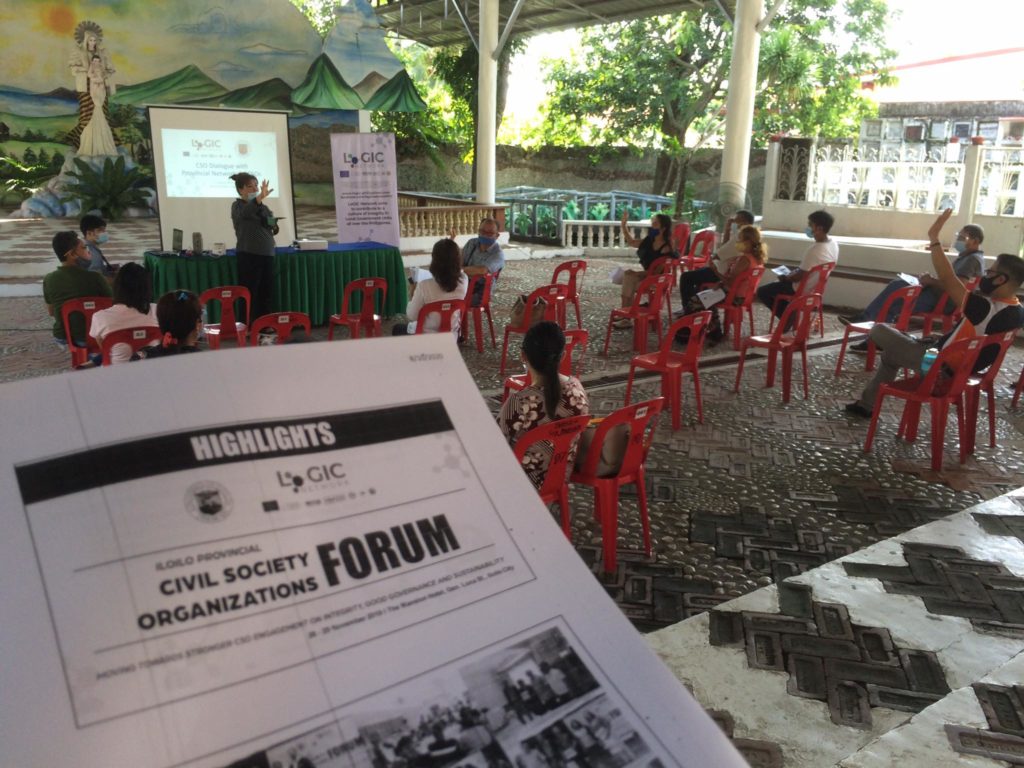 In Lambunao, the LoGIC Project’s Integrity Circle was also instrumental in making a responsive use of the 20 percent MDF – a product of the Market Vendors Association’s active participation in the budget process.

The outcome of the lobbying work by vendors is a “revised Market Code and a construction of the fish and meat section at the public market,” said Arlene P. Lavilla, head of Lambunao’s Municipal Economic Enterprise and Development Office.

As a result of the vendors’ policy advocacy work, more improvements for other sections of the public market is underway for the 1st Class Municipality.

A similar improvement in policies was also attained by Badiangan LGU, a 4th Class Municipality in Iloilo’s 3rd District.

For Selvido, the impact of the LoGIC Project is the proper implementation of the town’s Citizen’s Charter. This is further indicated by LGU workers’ internalization of the Anti-Graft and Corrupt Practices Act; adherence to the Code of Conduct and Ethical Standards for Public Officials, and observance of Full Disclosure Policy when they deal with stakeholders and investors.

The improvements delivered by the LoGIC Project did not come without challenges though. On the last year of its 3-year implementation, it faced the major challenge – the Coronavirus pandemic. It pushed off-track final set of initiatives that were designed to tighten the series of interventions that were employed.

By 2nd Quarter of 2020, the entire province was reeling from disruptions as a result of quarantine protocols enforced by the government.

Yet the pandemic only offered a momentary disruption to LGUs with an Integrity Circle. By the time the health crisis came rampaging in, key improvements were already integrated in the local governance system, an action taken from the results of their respective Integrity Self-Assessment Tool.

The multi-sectoral actors together with LGUs became convinced of collective decision-making as an indispensable formula in good governance. This was no less demonstrated by its Integrity Circles who occupied the frontlines to provide auxiliary support to LGUs. At the end of the day, good governance pulled the power of collaborative action and led them the way where local solutions can be found on a myriad of issues that affected their constituents.

In parallel, Iloilo Governor Arthur Defensor, Jr. exhibited leadership by quickly directing LoGIC Project coordinators to pivot at the height of the quarantine period by urging them to design a localized project intervention that will respond on the needs of LGU partners, like digitization training and other online support services. The Provincial Government provided appropriate resource support on the crucial last leg.

Executive Order No. 039, Series of 2020 was issued by Iloilo Governor Arthur Defensor, Jr. ordering the Reorganization and Reconstitution of the Integrity Circle in the Province of Iloilo for Developing Countrywide Culture of Integrity through Multi-Sectoral Local Government Integrity Circles.

Hence, the Local Economic Development and Investment Promotions (LEDIP) Center of the Iloilo Provincial Government and the Iloilo Caucus of Development NGOs Network (Iloilo CODE-NGOs) organized a digital package training for all 30 LGU partners. The compressed digipack capacity building tools for effective online work arrested the gap and it aligned LoGIC Project partners on the capability demands of the day giving them the ability to smoothly transition by bringing face-to-face activities online. 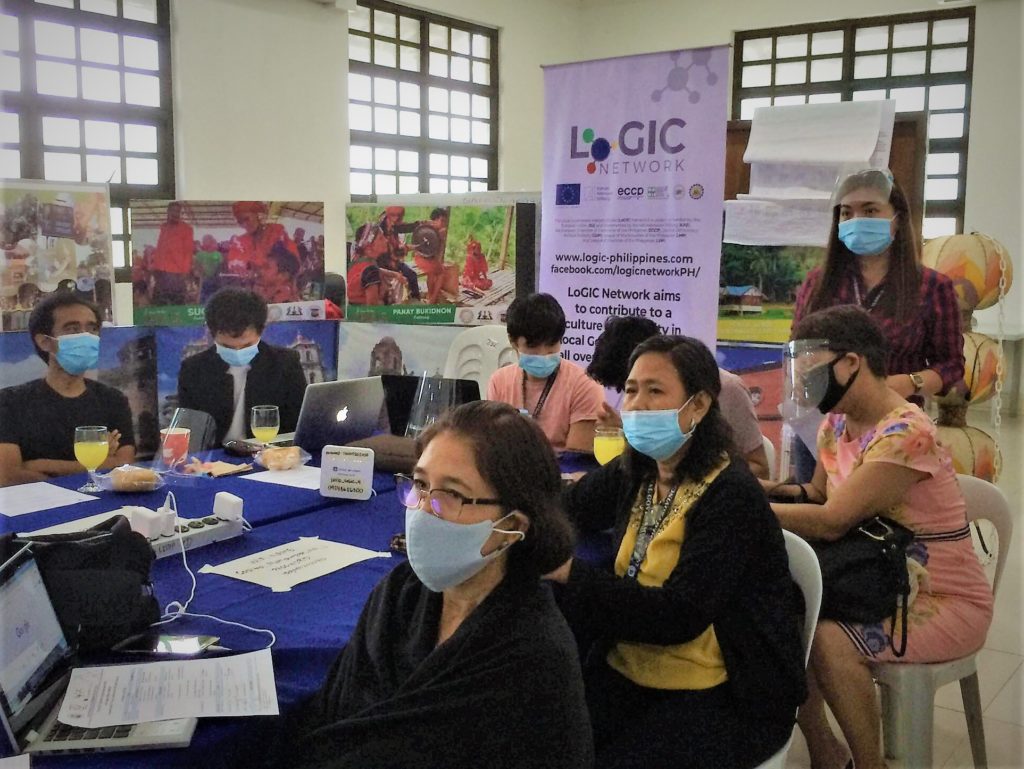 The digipack also provided them the capacity to carry out monitoring and evaluation of Integrity Mechanisms on their respective locality and it established information sharing and feedback mechanism among project partners for mutual support in these challenging times.

All of the participants across 30 municipalities were highly appreciative of the LoGIC Project’s final intervention, describing its activities as relevant and timely for the new normal.

The 3-year LoGIC Project is coming to its checkered close this October 2020 yet the multi-dimensional improvement that the project delivered to 30 LGUs in the Province of Iloilo will certainly endure across time and generations to come.