After the announcement done by Mayor Trenas, a message from the Run for Jesus organizers, through Dr. Robert Senening, released an official cancellation of the event within the day in submission to our local government with a full understanding of the risk. “The organizers will follow the recommendation of the city government,” said Dr. Robert Senening. “To clarify, it is not true that the majority of the attendees are Koreans,” he added. Before the outbreak of COVID-19, it was already expected that 400 Koreans will join the event. However due to the outbreak, 250 Koreans did not fly to the Philippines.

Claiming that these Koreans were infected, it was found out that these 400 Koreans undergone a screening resulting to only 150 are permitted and ready to fly. “They all have medical certificates with them,” said Dr. Senening. Of the expected turnout of 150 Koreans coming to Iloilo, only 24 Koreans arrived in Iloilo who bear medical certificates, health cards, undergone the screening, and carried no symptoms of COVID-19 yet still they submitted themselves to be quarantined. The 126 Koreans canceled their flights last minute. “These 24 Koreans never made any physical contact with Iloilo organizers since they arrived and checked in at Zuri Hotel and Injap Tower,” said Peter John Prado, one of the members of the organizing team. “They arrived Tuesday and flew home yesterday,” he added.

After the cancellation, the organizers are still hopeful to reschedule the event at a later date after exhausting millions of pesos just for the preparation. “We are processing the new permit. It will be on April 30, 2020. The city government promised that it will go well on that date,” said Prado.

The event was initially foreseen to be one of the major events in Iloilo City. Permits from the LTO, police department, city hall were ready. Department of Health already approved the event. It is undeniably a good grip for religious tourism this year with 30,000 people to gather, to be attended by a senator. However, the COVID-19 and other force majeure events were risks not expected in the planning.

Here is the official final statement of the Run For Jesus Organizers.

“The organizers and partner churches and organizations of the RUN FOR JESUS 2020 is issuing this statement to address the issues surrounding the cancellation of the permit issued by the government to hold the event over Covid-19 concerns.

The City Mayor with the recommendation of several government agencies from the city and the province, including the Department of Health in Western Visayas canceled the international event.

This was based on the information they’ve received that the “organizers and attendees” of the said event are from South Korea, who, according to the statement released by Mayor Treñas yesterday, are the same organizers who held a Run for Jesus event in Daegu City – an event which caused dramatic escalation of COVID-19 cases in South Korea.

We totally understand that the decision of the city government to cancel the event was for the protection of its people. However, we felt the need to clarify several issues:

1. The organizers of the RUN FOR JESUS 2020 are from local churches and religious organizations in Iloilo not from Korea.

2.The organizers, with the advice of the city health office already prepared all the necessary health and sanitary requirements prior to the event.

3. As mentioned in the Bombo Radyo interview yesterday, the 35 Korean guests already arrived in Philippine territory before the outbreak of COVID-19 in Daegu. All of these Korean nationals have medical clearances proving that they’re not infected and have gone through thermal scanning before they were allowed by the Bureau of Immigration to enter the Philippines.

4. When the city government expressed their concern over the possibility that our guests might be infected with COVID-19, the organizers humbly proposed that to answer this, we are willing to ask our guests not to attend the said event and undergo quarantine. The government still vetoed the request and yesterday sent police personnel to “hunt” our Korean guests at the mall and at the hotel, demanding to subject themselves for quarantine.

We want to make it clear that we are all for the protection and safety of our people especially the Ilonggos. As a matter of fact, the RUN FOR JESUS was born out of our love for Iloilo and its people.

We would also like to emphasize the fact, that though we were dismayed with the government’s decision we are in full submission to the mayor’s directive.

To the Ilonggo people who were looking forward to this event- please accept our apologies.

To our partners, friends, and supporters, our heartfelt thanks! We are rescheduling the event on April 30 and hoping that you’ll still be willing to journey with us until that date.

Copy of the official statement. 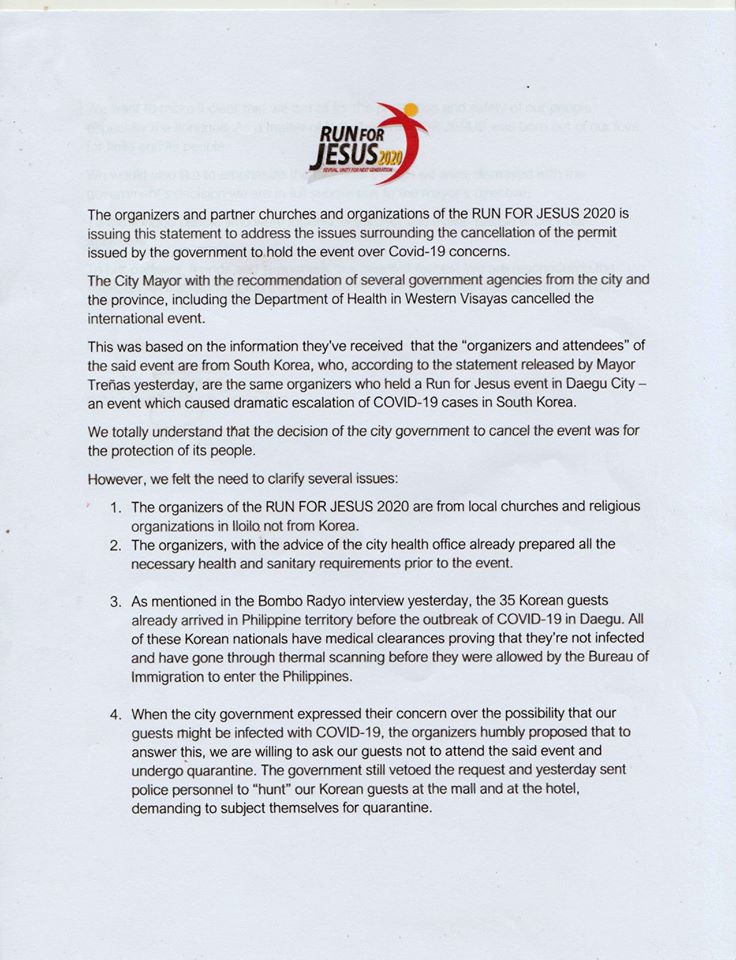 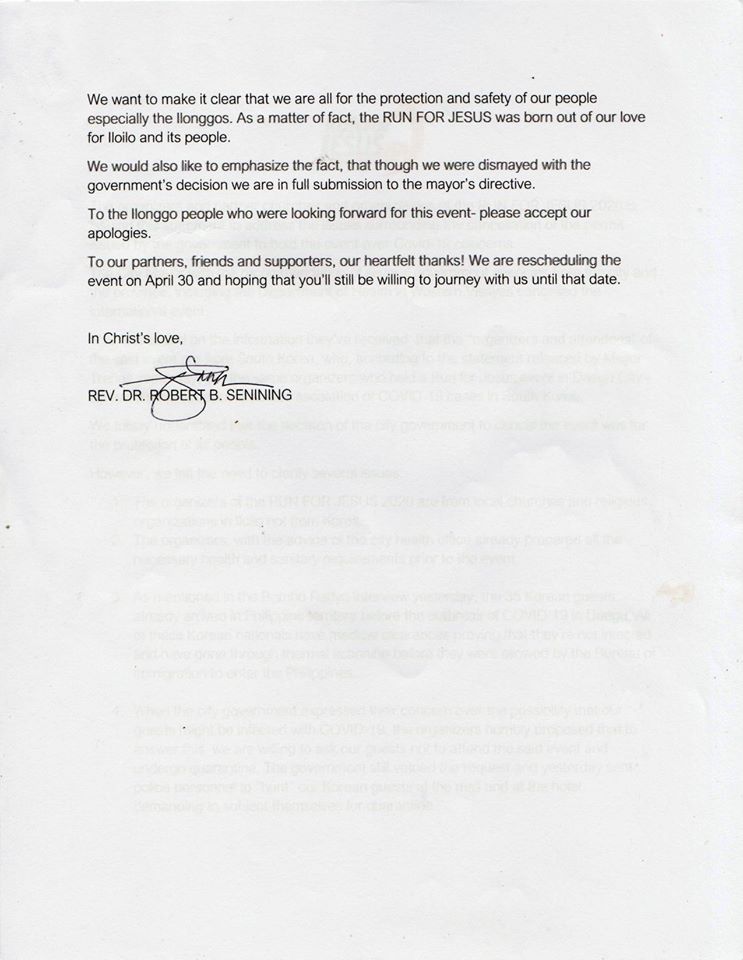 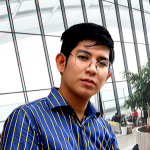