The Department of Social Welfare and Development (DSWD-VI) has reported a remarkable accomplishment in the delivery of aid to beneficiaries in Western Visayas in spite of the Extended Community Quarantine (ECQ) as a result of the COVID-19 pandemic.

In an update released May 15 and May 18, 2020, respectively, regional director Ma. Evelyn B. Macapobre presented a status update in the delivery of aid to beneficiaries of Social Amelioration Program (SAP), Social Pension for indigent elderly and the Pantawid Pamilyang Pilipino program.

The agency reported a 92 percent accomplishment in the distribution of social amelioration subsidy or covering a total of 91,062,199 families.

The SAP distribution accomplishment rate was achieved in barely two months period since the region was put on an ECQ.

The total amount released to beneficiaries is accounted at P6,373, 194,000 putting the status of the first tranche delivery “almost complete”. The release is ongoing among beneficiaries that comprises the remaining 8 percent.

The social amelioration is an emergency subsidy amounting to P6,000 per family beneficiary in the case of Western Visayas. It is a national government’s response for COVID-19 affected families under Republic Act 11469 or the “Bayahihan to Heal as One Act of 2020”.

The amount indicated by the law for release to qualified beneficiary is coursed through DSWD and governed by a Joint Memorandum Circular No. 1, Series of 2020. 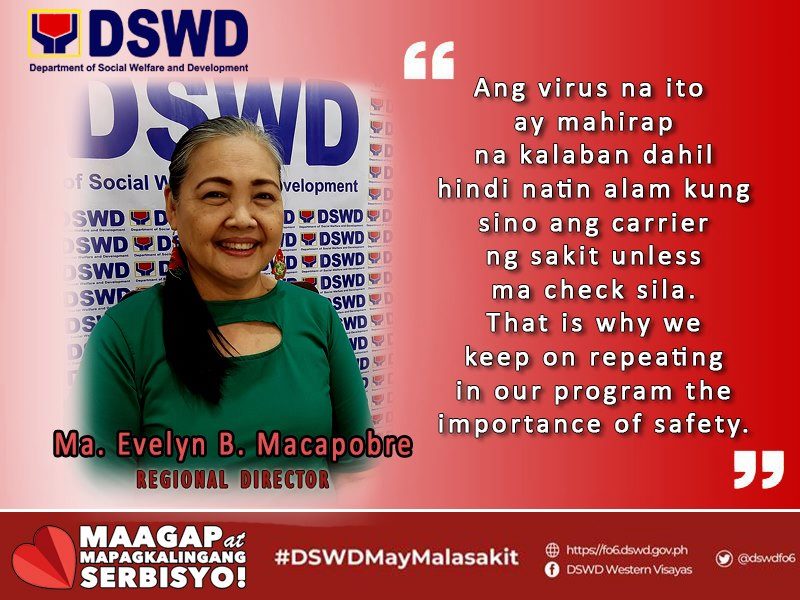 On the other hand, the agency distribution of social pension is already at 72 percent. A total of 265,119 beneficiaries has received their social pensions.

There are around 100,789 indigent elderly across the region whose pensions are on the process. The total remaining number constitutes 27 percent of the 365,908 total target by DSWD.

The full completion appears attainable considering that the agency has more than a month to go before the first semester (Jan. to June 2020) schedule ends.

The total amount released to beneficiaries is accounted at P795,357,000.

The social pension is a monthly stipend of P500 to qualified beneficiary. The amount, however, is being released per semester at P3,000 or a total of P6,000 per year. This is a regular program of the DSWD under Act Republic Act No. 9994 or the “Expanded Senior Citizens Act of 2010”. 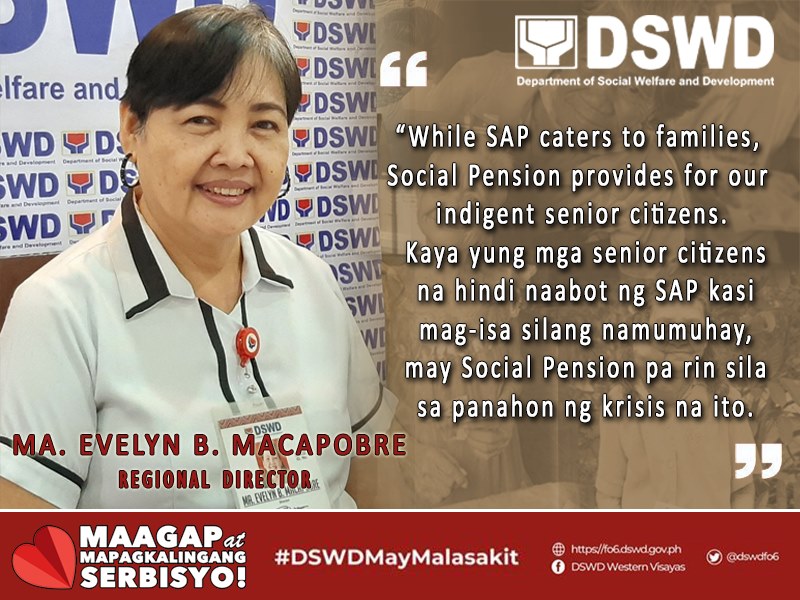 In addition, DSWD-VI also reported that 7,322 beneficiaries under the Pantawid Pamilyang Pilipino Program (4Ps) without a cash card have also received their SAP assistance.

Each of the beneficiary have received P4,650 SAP assistance, a P600 rice subsidy, and a P750 health subsidy.

The coverage for 4Ps beneficiaries is estimated to have totaled to P43,932,000.

Meanwhile, 85 out of the 133 LGUs have already completed their respective SAP payout and 41 have submitted liquidation reports to the regional office.

The agency has coordinated with around 133 local government units for the release of SAP aid alone.

DSWD-VI has accomplished the gargantuan task of subsidy releases to its beneficiaries from different locations, both near and far, because of strong coordination with the LGUs in the provinces of Aklan, Antique, Capiz, Guimaras, Negros Occidental, and Iloilo, and which includes Bacolod City and Iloilo City.

Regional Director Macapobre have reminded facilitators of aid releases, from the agency down to LGUs, the need to continue observing the health safety protocol, such as; wearing of the face mask, observance of physical distancing and hand washing or sanitizing.