The Overseas Filipino Workers (OFWs) who are returning home as a result of Covid-19 are on top-of-mind by beverage giant Coca-Cola as it opened an opportunity for them while on vacation or waiting for new assignments come post pandemic.

The initiative is synonymous with repatriated and voluntary return to home by OFWs or “Balik Pinas” as thousands of Filipino workers had started to travel back as a result of the disruption caused by the health crisis across the globe.

According to Coca-Cola, around 200,000 OFWs are expected to return to the country this year due to loss of jobs in countries of employment.

This segment of the economy, however, is also considered among the biggest investor or spender on services in the country through their remittances. In February this year or just a month before the lockdown, Bangko Sentral ng Pilipinas (BSP)  reported that 2019 was an all-time high in terms of OFW remittances at P33.46-billion. The figure likewise revealed a 3.9 percent increase from 2018.

The Dept. of Labor and Employment (DOLE) have shared that more than 400,000 Filipino workers abroad were already affected by the pandemic as of July 2020. Yet around 191,000 have decided to stay within the country of employment hoping to find a new work while majority have opted to be repatriated.

Balik Pinas Project was designed for those who are coming home with a beverage business in mind like a distributor, a wholesaler, or as resellers of Coca-Cola products.

Through the project, Coca-Cola Beverages Philippines, Inc. hopes to become a partner with OFWs by providing them a window to establish a livelihood enterprise that will provide a new income stream if they decide to stay in the country for good or leave to family once a new assignment presents itself abroad.

Get in touch with Coca-Cola if you intend to access the Balik Pinas Project. See the poster for contact details. 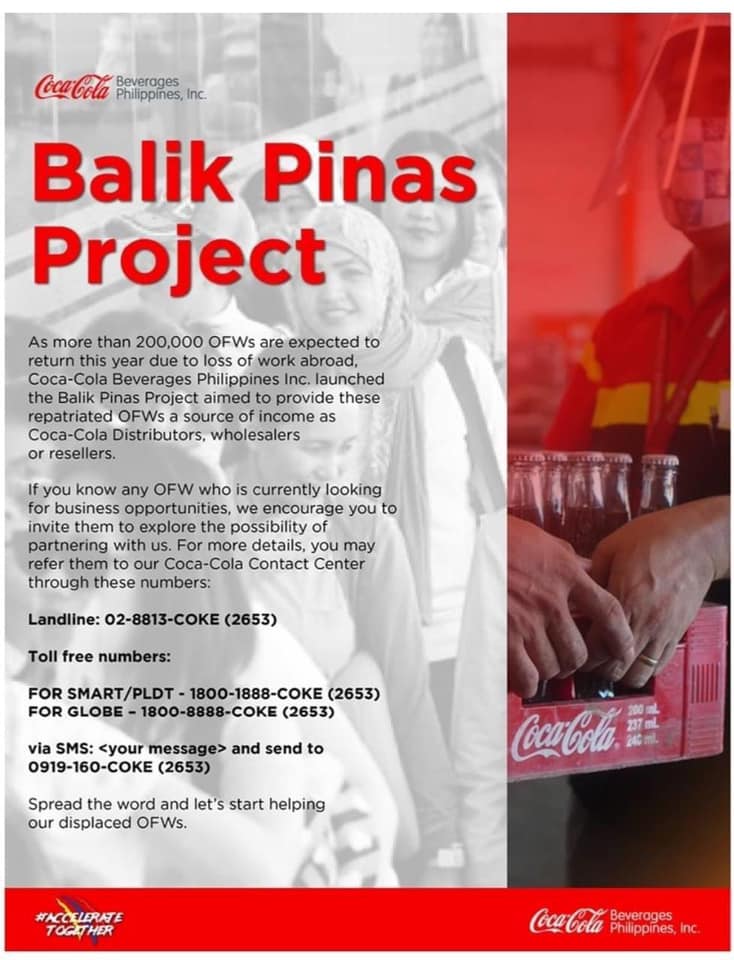 MORE Power cuts down brownouts in Iloilo City by 70%