More Electric and Power Corporation (MORE Power) will charge a slight increase in their electricity rate this April 2022, but it is still among the lowest in the country.

In an announcement online, MORE Power posted that from a previous residential rate of P6.82 per kilowatt-hour (kWh) in March, it increased to a total average rate of P7.23/kWh this April. It will be P6.82 for Commercial category and P6.86/kWh for Power category.

“Rates are expected to increase by P0.41/kWh. However, even with this increase, rest assured that MORE Power electricity rates are among the lowest in the country,” MORE Power stressed. 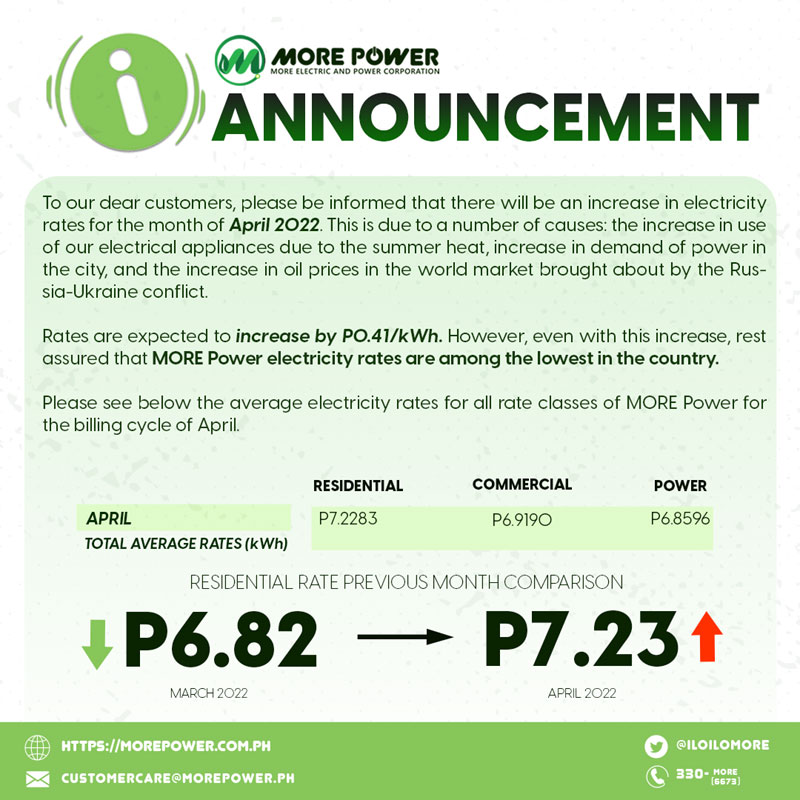 The Iloilo City distribution utility said that the hike is mainly due to the higher charges from the Wholesale Electricity Spot Market (WESM).

This power rate hike by WESM is attributed to the increase in the demand for electricity resulting in the dispatch of supply from high-priced generation units such as diesel-fired plants.

The continuing increase in global coal prices also has a significant impact on power rates as the majority of supply nationwide comes from coal-fired generation plants.

This increase in power rates is minimal as MORE Power currently still sources most of its supply from PSALM which is a geothermal plant classified as a renewable energy resource shielding its customers from the full impact of the coal and fuel price increases.

Because of this price hike, MORE Power urges its customers to be extra efficient when using electricity.