In an interview over an online radio, MORE Power President Roel Z. Castro said that the interruptions happening in their franchise area are mostly scheduled outages meant to improve the distribution system.

Castro said that some of these scheduled outages were done by the National Grid Corporation of the Philippines (NGCP), which handles the power transmission. They are upgrading their facilities to accommodate the demand of Iloilo City, which MORE Power recently connected to the grid.

“It’s only now that they (NGCP) are upgrading, and we are also upgrading. But these are necessary scheduled outages because we are rehabilitating in our franchise area; in the case of NGCP, they are doing it on our transmission connection to the grid,” Castro explained.

On the unscheduled outages, Castro said that it is really low right now and the response time of the distribution utility is very, very fast. 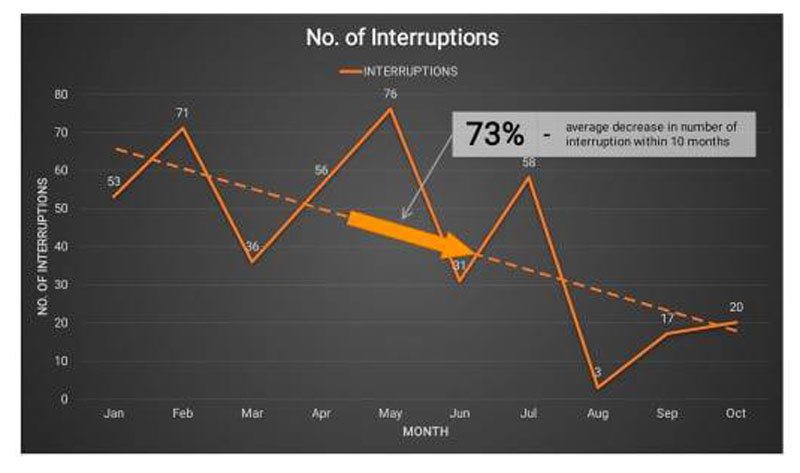 Based on the records of MORE Power in the last 10 months, they were able to significantly decrease the number of brownouts by an average of 73%. From as high as 76 interruptions in the month of May, it was down to just 3 outages in August.

For the duration of brownouts, MORE Power Deputy Head of Network Operations Engr. Bailey del Castillo said that their numbers show great improvement in that area.

“In the first quarter of 2021, our duration of interruptions is at 120 minutes but this November 2021 we were able to bring it down to around 40 minutes,” del Castillo said.

The frequency of outages also went down. From 3.6 times in the first quarter of 2021, MORE Power was able to lower it in November to 0.9 times, or less than one interruption per month.

Castro attributed the decrease in frequency and duration of power interruptions to the three major strategies/technologies they implemented: (1) installation of Automatic Circuit Reclosers (ACRs) and Line Breaker Switches; (2) installation of Animal Guards and Silicon Rubber Insulators; and (3) strategic deployment of quick response teams.

According to MORE Power, almost 90% of unscheduled brownouts were due to animals or tree branches accidentally coming in contact with the lines, or by abrupt weather changes like powerful winds and lightning causing interruptions in the flow of electricity.

“With this facility, we were able to avert over 70% of instantaneous causes of what would have been brownouts,” he added.

The interval is set at 5 seconds in order to give enough time for the equipment voltage to stabilize. Setting the time interval any lower than 5 seconds might damage appliances such as air conditioners and refrigerators, and may even cause accidents. 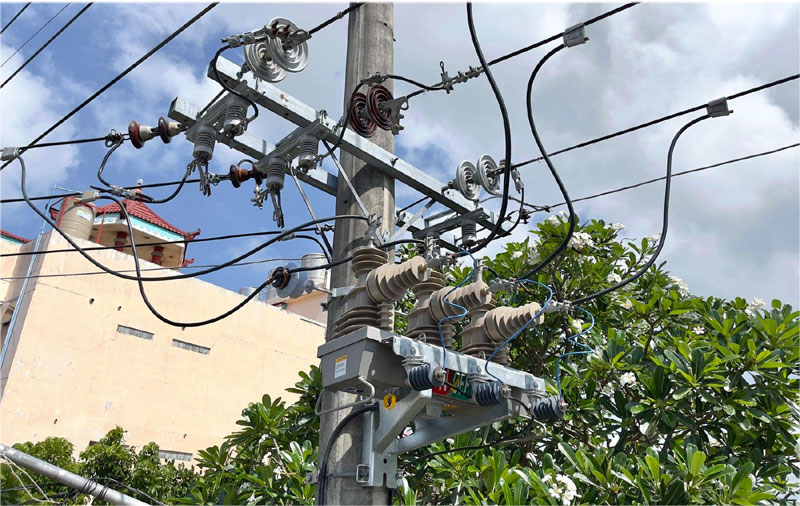 The ACR will only restore power when it detects that the problem is temporary. If the problem is permanent, like for example wire downs or damaged equipment, the ACR will lock out the power downstream from its location. This is to isolate the problem and not affect the whole feeder.

“In the past, if there was a fault in the line, the whole feeder conks out or interrupted, that is why more are affected. But with ACR, the feeders are now sectionalized. If there is a fault in the feeder, wherever that is, the interruption will now be limited to the section where there are ACRs.” 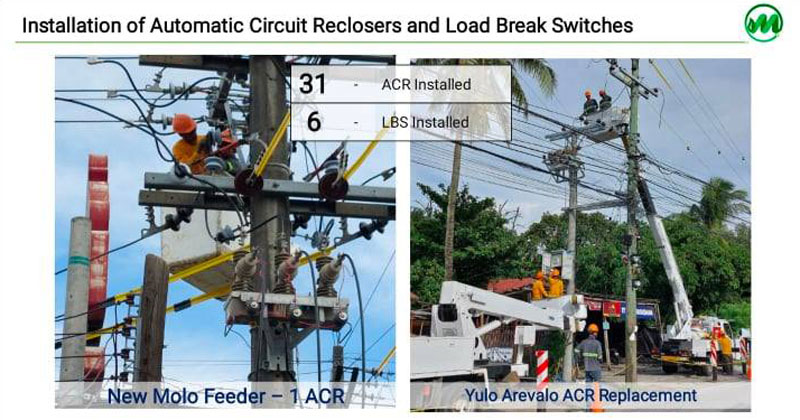 To date, MORE Power Iloilo has already installed 31 ACRs and six LBS distributed all over the city. Before the ACR, the power restoration would take 1 hour and 10 minutes. Now it takes a maximum of 85 seconds for transient faults.

Aside from ACRs, MORE Power has also installed tie-ups from one feeder to another, for an alternative source of power when there is an interruption.

“For example, in the past, there was no tie-up. But now, we have tied up Lapaz Feeder 1 to City Proper Feeder 4. If the Lapaz feeder gets out, we can still get power from City Proper feeder,” Castro said.

Right now they’re doing it manually but it will be done automatically in the future, he assured.

Based on records of MORE Power, intrusions of wild animals like geckos, snakes, and rats in electrical lines have also caused a number of brownouts in the city. Thus, the distribution utility has started installing animal guards and silicon rubber insulators so that these animals could not climb up the poles, touch the lines, and cause outages.

MORE Power has already installed 206 animal guards and 177 sets of silicon rubber insulators since it introduced these physical guards last March 2021. This led to a significant decrease of outages due to animal intrusion – from as high as 32 outages last May to only two and three in months of September and October this year, respectively.

For the duration of brownouts, MORE Power has optimized the standby location of response teams in areas that are already prone to outages. That way, they can respond immediately to any interruptions nearby.

The distribution utility also deployed quick response riders, the advanced unit of their Quick Response Teams for the immediate assessment, evaluation, and troubleshooting relative to electrical issues of consumers. They are designed to mobilize, diagnose, do repair works and restore power outages as fast as possible.

Riding in these two-wheeler vehicles enables them to wade through traffic jams and penetrate even the narrow roads and pathways of the city to respond to calls of the consumers.

These QR Teams are equipped with the basic lineman tools and materials, therefore capable of performing troubleshooting and quick repairs of single-house or multiple houses with no light – emergency trouble calls.

QR riders also have the capability to facilitate line tracing during feeder or lateral line outages, assess and diagnose the trouble call while waiting for a backup RT vehicle thus shortening the overall survey time which in turn shortens the time to restore.

They also conduct regular inspections even on interior areas to check the status of poles and secondary lines.

Iloilo City consumers have greatly benefitted from these strategies and technologies which resulted in lesser frequency and duration of power interruptions.

Sarah Jean, a mother and an ESL teacher for Koreans and Chinese students, shared that one of her biggest problems was the long and unexpected brownouts plus low voltage of power.

“Work from home employees like me would have to deal with that kind of stress. Now with MORE Power, it’s good to know that most of the houses in our community have their own electric meters and power lines. We seldom experience the same problem anymore. Also, More Power has a 24/7 customer line and Facebook page where we can freely check the updates about power interruptions and repair schedules. That means I can plan and identify ahead my alternatives for my work. For me, that is very helpful,” Sarah Jean said.

“A few years ago we were struggling with expensive power rates and high bills. When MORE had taken over, my bills are no longer expensive. I remembered the first bill I paid after the reduction; it was just about Php 158. I was surprised! With MORE Power, I only pay between Php500 to Php 700 per month!” she added.

Mila, a dressmaker and mother of four, relies on stable electricity for her livelihood. She is very thankful that under MORE Power, there are lesser brownouts which means more productivity for her.

“If there’s a brownout, my sewing machine would not run and I could not finish the dresses. It’s nice that there’s less brownout now with MORE Power, and whenever it goes off, the power is quickly restored. So my work will not be derailed and I can give the finished dresses to my customers on-time,” Mila said.

“And of course, their electricity rate is very low which means more savings for us,” she added. 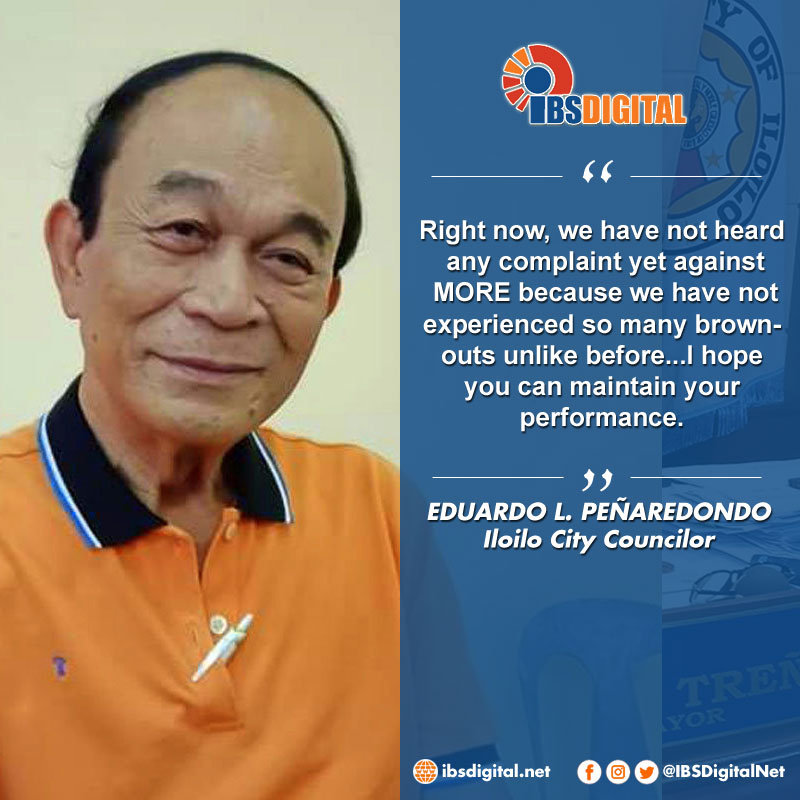 Councilor Ed Penaredondo is also happy with the performance of the distribution utility in almost two years of servicing Ilonggos.

“Right now, we have not heard any complaint yet against MORE because we have not experienced so many brownouts unlike before…I hope you can maintain your performance,” Penaredondo said.

Penaredondo is also hoping that the electric company can perform even better “so that we will all be happy.”

“Good service, reasonable price, and that’s it. We will promote the growth of the city and improve the standard of living of the people,” he concluded.